For Ropeless Fishing Gear Contact Us Now.
Fishing is a rope intensive process and a large majority of fishing operations rely on ropes. For the most part, ropes are used whilst the fishing process is taking place and as boats are engaging with fishing. Sometimes, in the case of fixed gear fishing, ropes are used to facilitate the use of marker buoys, showing fishermen where fishing gear is being kept or where traps are being laid. In this scenario, rope is extremely valuable as it is used in the process of marking the location of a valuable payload, being a trap containing lobsters, crabs or other target species. Ropeless fishing gear is used to describe any fishing gear that does not require large amounts of rope for its successful use. There seems to be a grey area in the term “ropeless” as some systems that use rope are still considered ropeless. A ropeless system is typically used to describe a system that successfully reduces the need for extensive rope used in a certain fishing process. For example, a ropeless buoy system will remove the need for extensive vertical rope connecting a surface marker buoy to a submersed trap. An example of this is the Fiobuoy by Fiomarine. The Fiobuoy, is a ropeless buoy solutions as it removes the need for a surface to seabed vertical rope connecting a floating buoy to a submersed trap. The buoy works by sinking with the payload, usually a lobster or crab trap and then later released and floating to the surface when it is time for retrieval. The release event is triggered by sending an acoustic signal down to the buoy, causing a pin to unclip allowing rope to uncoil, letting the buoy float to the surface. Even though rope is used in this system, it is considered “ropeless” as it does not require extensive vertical rope to be used through the whole process, only during retrieval.Removing this vertical rope is a major factor in reducing the occurrence of whale entanglements in the fishing industry. For this reason, ropeless solutions, like the Fiobuoy have been gaining in popularity as a solution for the ever present issue of marine life entanglement, particularly endangered whale species. 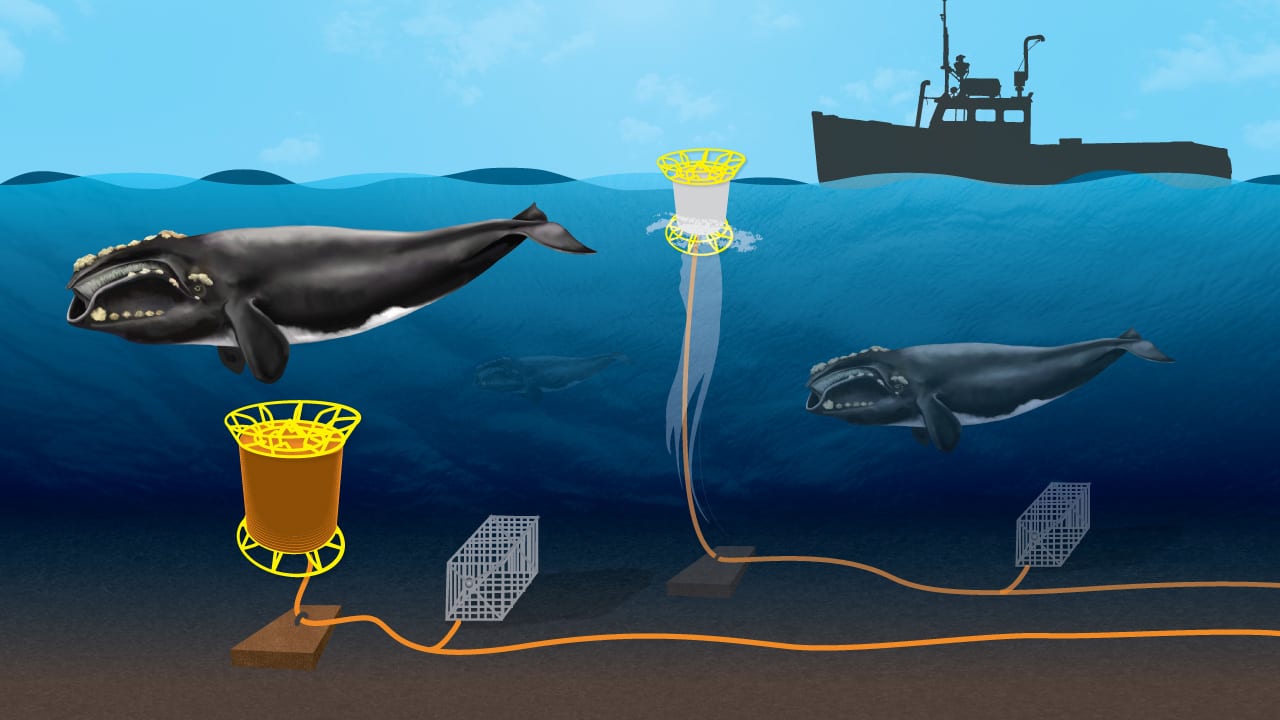